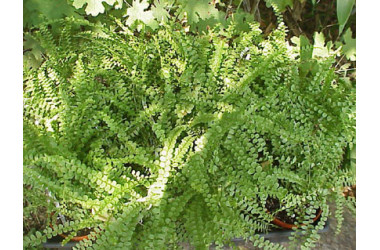 "Tatting ribbon Fern" Small erect, then somewhat arched fronds with all pinnae reduced to rounded buttons along the rachis--larger statured than N.C. 'Duffii' with appearance of Pellaea rotundifolia. Also called 'Patty Roosevelt' even though, like all the cordifolia cultivars, this forms weird subsurface tubercules resembling sci-fi cocoons and thus is definitely not an exaltata cultivar at all despite all the plant tags from Florida to the contrary!