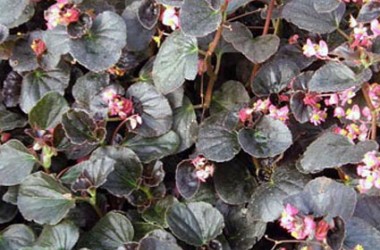 (sempervirens)"Hardy Wax Begonia" Appears to be an unusually full statured, dark foliaged "Wax Begonia" with easily produced rose pink (to red) blossoms; but beneath the soil it forms real tubers--has survived short shots of zero degress in Atlanta (of course, the soil was not frozen).We repeat this; we do not guarentee this. I have talked with the person who introduced and registered this plant with the American Begonia Society. We have found out that it was introduced in 1994 (mid nineties). The plant to first introduced by Craig Walker who named the plant after his grand daughter, Kaylen. He says that is it hardy in his area, Chattanooga, Tennessee. He originally distributed it through Allan Armitage.